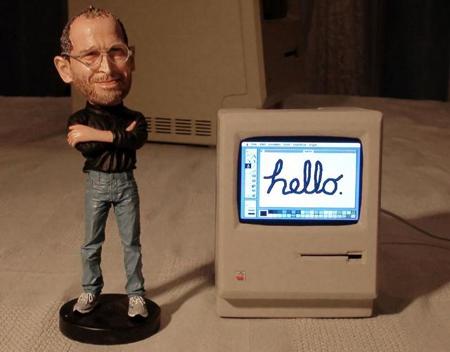 It is not every single day that you see an icon from the past get transformed to catch up with the times, albeit in a far more miniaturized form that would surely have confounded your ancestors – all without having to use a shrinking gun to boot. The first Mac ever, which so happens to be Apple’s iconic beige box that made its mark in many peoples’ consciousness in a memorable 1984 TV commercial, also proved to be the harbinger of GUI (Graphical User Interface) for consumers, while being the grand daddy of all all-in-one computers that seem to be all the rage these days where desktops are concerned. Here is an idea, how about remaking the original Mac in a far smaller form factor, and ensuring that it will also work as desired? This is where such a DIY project comes into play, where this Mini Mac will run with innards powered by a Raspberry Pi computer.

John Leake, a self-proclaimed Mac nerd, is the one behind this ⅓ scale Macintosh 512k (or 128k) replica, using white PVC as the building block of choice, in addition to a Raspberry Pi credit-card sized computer (motherboard), while fitting a small 3.5-inch LCD monitor – and all of this can be put together only if you have the relevant technical know how of doing so.

Apparently John Leake spent approximately a dozen hours building this particular working computer. The 3-millimeter-thick PVC was obtained from the sign shop where he works, where it was subsequently bent and carved in the manner that he wanted, and plenty of time was spent to ensure that the bezels end up looking right as rain. Of course, Leake did not rule out the possibility of using a 3D printer for future case builds. Other hardware features of this DIY Mini Mac include an HDMI out port, USB and Ethernet ports. It will boot from an SD memory card and runs Mini vMac, which happens to be an open-source Macintosh OS emulator that enables the Mac software to run without any hiccups across a range of operating systems, Linux included.