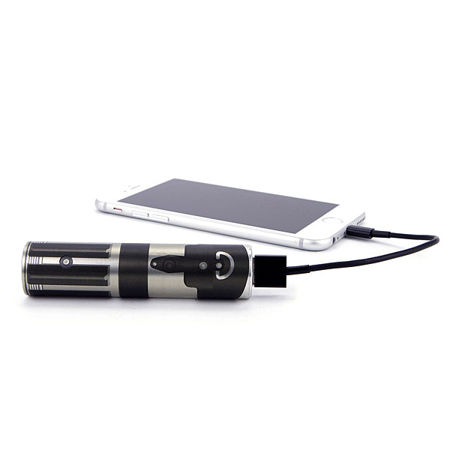 Being strong in the Force, if you are a Star Wars fan, would mean that you have a fair number of midichlorians within that allows you to manipulate the Force, and depending on your slant, you could either opt to learn the dark arts, or remain on the Light Side of the Force in order to uphold the tenets of justice and righteousness in the galaxy. Well, things might not be so complicated in real life, as all that you really need to know about the $29.99 MimoPowerTube Star Wars V2 is this – it has nothing to do with the fictional Force, but rather, has everything to do with charging up your tired mobile devices such as smartphones whenever you are on the move.

The MimoPowerTube Star Wars V2 basically works this way – it is but a power bank, except that it will arrive in a variety of form factors that are certainly associated with the Star Wars universe. Each purchase will feature a USB charging cable with multiple tips, just to make sure that it has the greatest degree of compatibility along the way, of course. You will be able to recharge it via USB too if you so desire, and the various models from which you are able to pick from would be Boba Fett, Darth Vader’s Lightsaber, R2-D2, and Yoda, and they boast of a 2600mAh capacity.