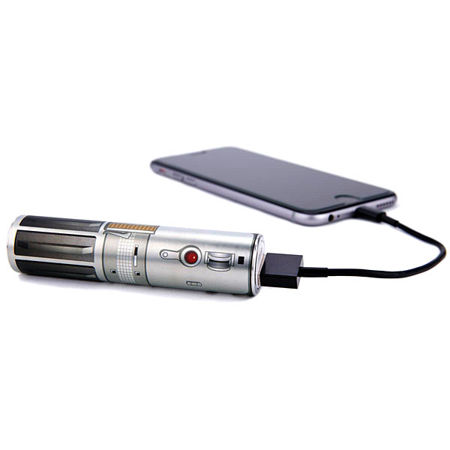 Are you looking forward to the upcoming Star Wars film that is set to hit the silver screen in due time? Surely, the continuation of this space opera franchise, to continue from where Star Wars: The Return of the Jedi left off all those years ago, is a massive undertaking. Since then, we have had three underwhelming prequels, not to mention a whole slew of fiction that accompanied it, in addition to numerous toys and other merchandise. Well, you might want to add the $29.99 MimoPowerTube to your list, as this Star Wars inspired portable battery pack certainly looks the part.

It mainly resembles that of a lightsaber hilt as well as other Star Wars characters, where you can choose from numerous styles, as each of them will come accompanied with a USB charging cable – not to mention its fair share of tips in order to make sure that it will be compatible with just about every smartphone out there as far as possible, even throughout the galaxy. The various designs from which you will be able to pick from include those of C-3PO, Darth Vader, a lightsaber, and Stormtrooper, stashing 2,600mAh of juice within, taking approximately 3 to 4 hours to charge up. Definitely one of the cooler looking portable battery designs around to date.