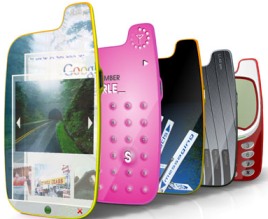 I suppose that whoever came up with the name of the Mimique was probably looking for some fancy way of saying mimic. The Mimique concept cellular phone from RKS certainly “mimics” several aspects of both old-school and contemporary cellular phones.

As far as old school goes, the Mimique phone has the distinctive shape of those ten-year-old phones, down to that side antenna that hopefully did something.

As for the newest design influences, the Mimique has full touchscreen capability. One of the reasons why RKS designers decided to go with the old-school shape was they thought the iPhone and iPod touch looked too much alike. They wanted to make a touchscreen phone that actually looked like a phone, not some other mobile device.

The Mimique is also designed to be sleek, compact enough “to fit comfortably into your hand and slip easily into a pocket”.

Another outstanding feature is its open-source software that makes the Mimique easily upgradeable. Apparently, you won’t have to buy the newest version of the Mimique when a new feature comes out. You just download it onto your phone easily.

The user also has the option for downloading certain “skins” in order to personalize the graphics interface. It also comes in a variety of very cool colors.

The Mimique is still in concept phase as of now, but there has been a lot of hullabaloo about it on other blogs. It probably won’t be long before you can purchase it.