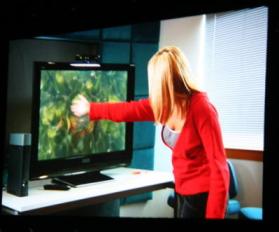 Nintendo Wii, your days could be numbered. Sure, you have been dominating the console gaming world with your motion-controlling Wiimotes, but are you ready for Project Natal?

Microsoft has recently revealed this full-body, motion-sensitive controller at E3 in Los Angeles, and it has understandably received a lot of attention. Project Natal is a TV-mounted camera/microphone that can sense motion, three-dimensional movement, even sound.

In other words, it is a controller without a controller, like the iPhone games that require nothing but movement. The company demonstrated this new technology with two new games. The first was Ricochet, a brick-blasting game that puts the player in the midst of Breakout, and Paint Party, a game that allows you to splatter paint with virtual brushes. You can see Ricochet demonstrated after the jump.

On hand at E3 to introduce Project Natal was none other than acclaimed director/producer/mogul Steven Spielberg. Is he now exclusively doing video games like Boom Blox?

Anyway, Spielberg said that “people are too intimidated to pick up game controllers”. Oh, that is a slam on button-munching PS3 and Xbox 360 joysticks, isn’t it? By the way, someone in the conference also slammed users who “sit on the sofa using some kind of preset waggle commands”. Oh, now the Wii is getting burned!

Project Natal should be available on all versions of the Xbox 360 “soon”. Yeah, I know, I want it ASAP, but that was all the word that was given. No word on price, either. Expectations are high.