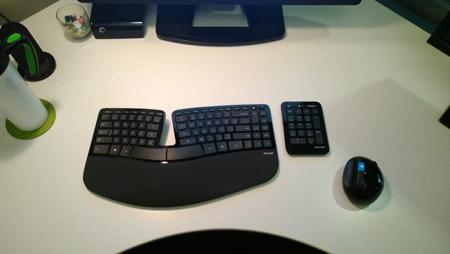 Do you remember sometime in the late 1990s? Microsoft did roll out their fair share of hardware, be they mice or keyboards, and one of the most memorable keyboards from Microsoft that I have used back then for typing out all of my assignments would be the ergonomic keyboard, the one with its keys split right down the middle, where the keyboard itself is contoured in such a way so that your hands would just rest on it comfortably for long hours of typing without experiencing fatigue too quickly. Sure, Microsoft has since then concentrated a whole lot of its efforts on its operating system through a variety of versions, but that does not mean they have forgotten about the hardware scene. No sir, the latest products would make up the all new Microsoft Sculpt Ergonomic Desktop.

The palm rest itself is cushioned, while the keyboard sports a “domed” shape as you can see above so that wrist pronation is reduced. The internal codename for the keyboard was “Manta Ray” for a very obvious reason as you can see, while reverse-tilt angles help promote a straight, neutral wrist position. This keyboard has been specially optimized for Windows, boasting relevant hotkeys at the top to deliver quick access to the charms in Windows 8 (and Windows 8.1). The Sculpt Ergonomic Desktop will be available later this month for $129.95 a pop, and you can pick up the Sculpt Ergonomic Mouse as a separate peripheral for $59.95.