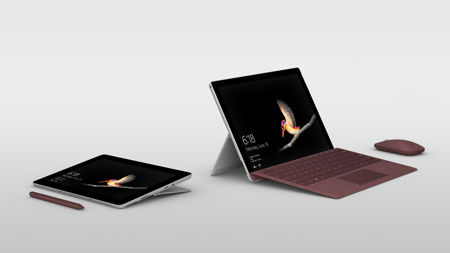 The tablet industry is not exactly one that sets the world alight with news of a new model, but when it hails from Microsoft or Apple, it is best to sit up and take notice. There is a brand new Microsoft Surface Go tablet in town, where this 10-inch bad boy will have a starting price point of $399, arriving in a couple of hardware specifications for the discerning road warrior to choose from.

Sporting a built-in kickstand and running on Windows 10, the Surface Go will carry a similar design to that of the Surface Pro as it ships later next month. Sticking strictly to Microsoft’s Surface design ideas, the Surface Go sports a 3:2 aspect ratio display with 1800 x 1200 pixel resolution, a kickstand with virtually unlimited positions, a front-facing camera that boasts of facial recognition login, as well as Microsoft’s proprietary Surface Connector port that is useful when it comes to charging and hooking it up to a desktop dock.

This time around, Microsoft has also thrown in a USB-C 3.1 port, enabling it to power up the tablet through more conventional means, or perhaps to output video and data to various external devices. In addition, it comes with rounded corners and an all too familiar magnesium design. Tipping the scales at 1.15lbs, the Surface Go is certainly a lightweight mobile productivity device, although it is a wee bit heavier compared to the iPad. Rather large bezels continue to surround the screen though, which is not something new smartphone users might be used to. However, there is a reason for the bezels: in order to provide an area for one to hold the tablet, as well as make room for a wider keyboard attachment.

The 4GB RAM with 64GB eMMC model will have a recommended retail price of $399, while those who would prefer more power underneath the hood will have to pony up $549, obtaining 8GB of RAM and a 128GB SSD in the process.