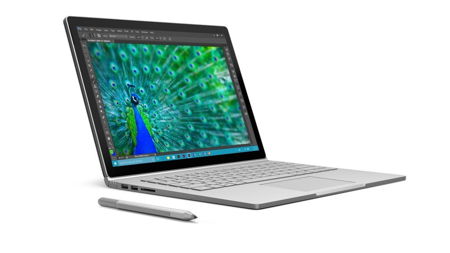 It does feel as though we have more or less hit a plateau when it comes to tablets – where the world is firmly entrenched in the extremely popular iOS-powered iPad range, as well as the Android-powered tablets that hail from a myriad of hardware manufacturers. The thing is, there is the Windows-powered segment, and with the release of Windows 10, you know for sure that this particular segment of the market might just grow even further to eat into the dominant two shareholders’ segments. After all, the Surface Pro from Microsoft can be said to be the template for the recently announced iPad Pro, and here we are with Microsoft taking the lead yet again with another innovation – the all new Surface Book.

The Microsoft Surface Book happens to be a powerful, high-performance laptop that will boast of stunning craftsmanship and incredibly accurate and responsive pen and touch support. It is extremely thin in its form factor, where it will be powered by a 6th generation Intel Core i5 and Core i7 processors that will be able to last for up to 12 hours of battery life for the average user. Apart from that, there is also a 13.5″ optically bonded PixelSense Display that is capable of delivering a high-contrast 267 dpi display that boasts of improved latency and parallax, which makes it deliver both form and function into a single device.

The screen itself will also detach – allowing you to make use of it as a tablet, where it can function as a clipboard to sketch, or even to take notes as well as benefit from Windows programs such as Microsoft Edge. There is also an optional discrete GPU which will enable the Surface Book to harness the full power of hardware-accelerated graphics for seamless video editing, fast rendering or immersive gaming. The Surface Book is not going to come cheap though, since it will be priced from $1,4995 onward, which might just place it out of reach for the entry level or mid-range markets.