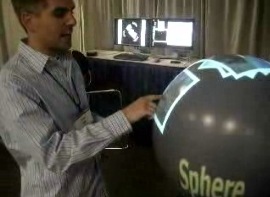 I’m surprised that someone hasn’t already covered this particular gadget yet, because it is definitely one of the coolest gadgets that I have seen in quite a while.

We have covered stories on Microsoft’s Surface, a touchscreen mounted on a coffee table frame. The Sphere is the next step up from the flat display, as the user interacts with something round, for a change.

The Sphere is prepared for the next generation of 3-D interactivity and viewing. It is the perfect viewer for watching footage from cameras with a 360-degree view. The user can then “spin” it to view it from any angle.

The user can also “spin” the globe function, just as they could a real globe. I can imagine their version can do a lot more than a regular one.

As for a photo viewer, it works a lot like a touch screen viewer, but on a big ball. In fact, if you place and keep your hand on the photo, it automatically transports over to the other side of Sphere.

Microsoft is going to showcase the Sphere today, but it doesn’t look like it is going to be available anytime soon. However, with something as cool as this, how could you not resist rushing the development? I want to be able to grope this big bad ball by CES 2009.