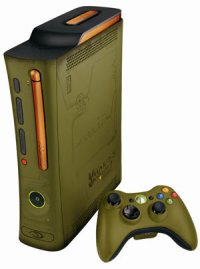 Halo 3 fever is running high, and Microsoft has already prepared for the game’s launch by stacking up tons of Xbox 360 Halo Special Edition bundles that feature Xbox 360 Elite features without sporting a high price tag. According to Microsoft, this version of the Xbox 360 will come in green and gold colors to usher in what is considered to be the biggest title for the Xbox 360 platform for the year. This is definitely good news for fans of the Halo franchise and have yet to pick up the Xbox 360 for this generation’s console war – after all, they’ll be able to pick up this unit from a nearby local electronics and games retailer now while waiting in anticipation for Halo 3 as it is released next week.

Features of this special edition console (no idea on how limited its availability will be, or will it be produced in abundance?) include an authentic Spartan green and gold finish along with a matching Xbox 360 Wireless Controller, a regular 20GB hard drive (come on, Microsoft! Why couldn’t you throw in something larger?), a headset for a more intense experience, a Play & Charge Kit, Halo 3 Gamer Pics and Theme available via Xbox Live download. What makes this special edition bundle stand out from older Xbox 360 Premium bundles would be the inclusion of an HDMI output which already started appearing in newer Xbox 360 20GB Premium consoles.

Of course, I personally think Microsoft should also include a Halo special edition of the Xbox 360 Elite as it is pretty easy to max out a 20GB hard drive, considering the amount of fun downloads there are on Xbox Live. Nevertheless, the Xbox 360 Halo Special Edition console will retail for $399, commanding a $50 premium over the standard Premium console. It is interesting to note that Best Buy did offer guaranteed HDMI output Premium bundles for $349 for a limited amount of time. If gaming is not your thing and you still want to jump onto the Halo 3 bandwagon, there are always specially commissioned black and brown Halo edition Zunes preloaded with appropriately themed soundtracks and media.