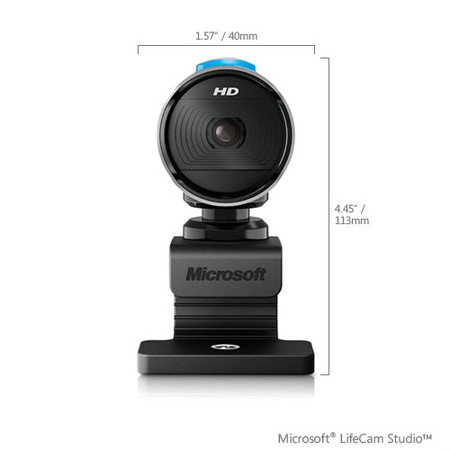 Microsoft’s latest LifeCam Studio webcam is prepared to hit the ground running, especially for those who are involved in long distance relationships as well as folks who grew up in a closely knit family, but simply because of education and work, had to be relocated to a different city or state altogether. Instead of relying on expensive phone calls, why not settle for video calls over the computer? With the advent of VoIP software such as Skype, communications has gotten a whole lot easier, cheaper and convenient. Webcams have been an indispensable tool in this area, and Microsoft hopes to add some polish to this peripheral market with their latest LifeCam Studio webcam which will usher in the High Definition era.

As mentioned earlier, the LifeCam Studio will boast sharp high-definition (HD) video with a true 1080p sensor in order to be the perfect companion to Windows Live Messenger 2011. Not only that, this IM will be able to deliver HD video calling in a 16:9 widescreen format, letting just about everyone be seen easily in the video call, warts and all. After all, it is always nicer to watch a video of someone instead of just hearing the voice, is it not? Its native 1080p sensor is more than twice as large as the 720p HD sensors on the market, allowing more light to come in so that people are able to experience great video in just about any lighting condition. Regardless of whether the sun is streaming in the window or whether the user is lit only by the light from the computer monitor, the LifeCam Studio manages to bring your close and loved ones closer than thought possible (subject to your Internet connection’s speed, of course).

What’s function without form? The LifeCam Studio does not disappoint in terms of looks, where it is the first from the company to feature a tripod thread, making it ideal for recording long video captures from various angles, and not only just sitting in front of the monitor. Other features include a 360-degree view range, an elongated hood and improved Auto Focus. Out later this month, expect to fork out $99.95 for the LifeCam Studio.