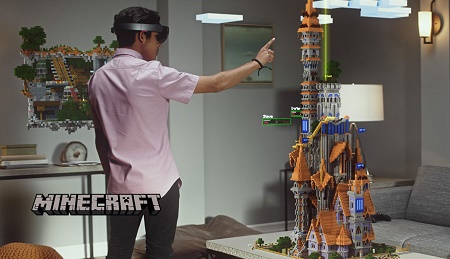 In the ever-changing technology market, we get used to having the latest and greatest pop up on our screens and then having it fade away to make room for the new version of the latest and greatest. While we looked at the idea of the HoloLens a while back, we haven’t touched on the strides Microsoft has made since then. E3 is the opportune time to throw out some new goodies for the gaming community, and since everyone loves Minecraft, it seemed only natural to put the two together. Especially since Minecraft was purchased last year with this specific project in mind.

Of course, when you see an entire world come into being right before your very eyes, it’s easy to get caught up in how cool the premise is. Don’t be fooled by the way the previous sentence seems, because this device is awesome. The Hololens has the opportunity to be the hot new thing in as we trudge ever-closer to more realistic virtual reality. However, the Microsoft conference may have not shown us the full picture, by showing us what the Hololens can do with a full-on camera fitted with the technology. The real Hololens is going to be a bit bigger than a pair of sunglasses, and is very likely going to have a small field of vision with lots of bugs to work out in the first few years of release.

The release is slated to be sometime this year, and sooner rather than later, but there is no hard date as of yet. As far as price goes, you can imagine that it’s going to cost a good deal more than a console. Of course, this is going to play nicely for more than just games, as they showed off its abilities for school and work life at another Microsoft conference a few months ago. With all this said, it’s a wonder what will happen, as this device is clearly going to be wrestling for prominence with augmented and virtual reality. All we can do is wait it out, and hope that we throw our money in the right direction.