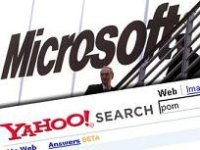 Remember the tango that Microsoft had while trying to court Yahoo? Well, apparently their attempts were unsuccessful, as the Redmond computing giant has just announced that it will be withdrawing its proposal to acquire Yahoo! Inc. According to Steve Ballmer, chief executive officer of Microsoft.”We continue to believe that our proposed acquisition made sense for Microsoft, Yahoo! and the market as a whole. Our goal in pursuing a combination with Yahoo! was to provide greater choice and innovation in the marketplace and create real value for our respective stockholders and employees.” Good ol’ Steve has more to say after the jump.

“Despite our best efforts, including raising our bid by roughly $5 billion, Yahoo! has not moved toward accepting our offer. After careful consideration, we believe the economics demanded by Yahoo! do not make sense for us, and it is in the best interests of Microsoft stockholders, employees and other stakeholders to withdraw our proposal. We have a talented team in place and a compelling plan to grow our business through innovative new services and strategic transactions with other business partners. While Yahoo! would have accelerated our strategy, I am confident that we can continue to move forward toward our goals,” Ballmer said.

I wonder whether Yahoo CEO Jerry Yang has what it takes to steer the giant Yahoo ship around, as it might have the largest user base to date but if it cannot keep the current subscribers interested in its services, then there isn’t much of a future as well. Microsoft too, will also continue to lose out in the lucrative search engine market. What do you think – will Google now take the next step to swallow up Yahoo? That will definitely not bode well for Microsoft since it will be up against a yet bigger giant, but I sincerely doubt Jerry Yang’s ego will be able to stomach such an affront.