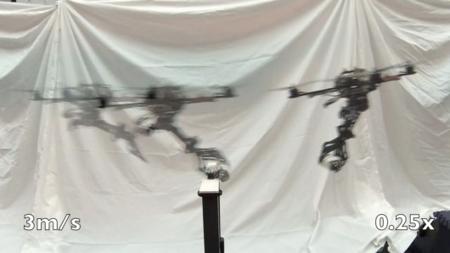 The military world is definitely moving towards the adoption of robots and robotics, ensuring that there will be a lower loss of life on the battlefield, not to mention robots being more efficient at certain tasks without having to grow weary or tired even as they work round the clock. Unmanned Aerial Vehicles (UAVs) have been a mainstay in the US Army for some years now, and the Predator drone is a prime example, but what happens when you take that concept and draw more inspiration from nature? You will most probably end up with what you see above – the Micro Unmanned Aerial Vehicle (MAV), which works in the way of an eagle, as it is capable of grabbing objects on the fly with the elegance of an eagle that swoops down from high above to snatch an unsuspecting fish from the water’s surface.

These days, MAVs and UAVs are increasingly being equipped to pick up, transport, and drop off payloads, but to check out a MAV that sports such a precise form of grasping while in mid-flight is definitely something of an eye opener, and for some, an act that will require one to pick up one’s jaws from the floor afterwards. University of Pennsylvania research team members Justin Thomas, Joe Polin, Koushil Sreenath and Vijay Kumar, were the ones who programmed the quadrotor MAV after observing movements of an eagle in nature videos.

They realized that birds of prey tend to reduce the velocity of its claws dramatically in relation to its prey, doing so by sweeping its legs back at the point of impact so that it can grasp its intended target without having to slow down an iota. As the MAV tips the scales at a mere 500 grams, a design that can accommodate an appropriately light weight arm and gripper would serve the advancement of this idea well.