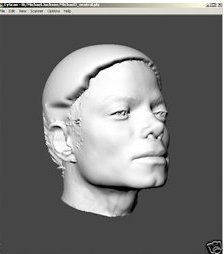 In 1997, Michael Jackson had a 3D scan taken of his body. Some have supposed that this was part of Michael’s plan to build a virtual reality double of himself, but honestly, we don’t know.

After all, this was the man who slept in a plastic tube during the eighties. Who knew what was on his mind? Considering all the controversy surrounding him with his court cases, maybe we don’t want to know.

Still, this 3D scan data has been put on sale by an anonymous seller for one million dollars. This seller says that: “it [the 3D scan] immortalized him at the age of 37, before his nose was disfigured and when he was in the prime of life”. Really? The prime of his life was in 1997? I would have thought it would have been during that “Thriller” or “Bad” era.

So what could this data be used for? What about making a Michael Jackson robot, like the type in Moonwalker. Maybe if holographic technology gets better, we could live to see the day when Michael Jackson struts on stage again.

Man, I just can’t believe this. I’m actually talking about using technology to bring a dead music idol back to life. If you want to see a CG version of Michael Jackson, this video on YouTube was made by some fan. Until then, This is it. (Get it?)