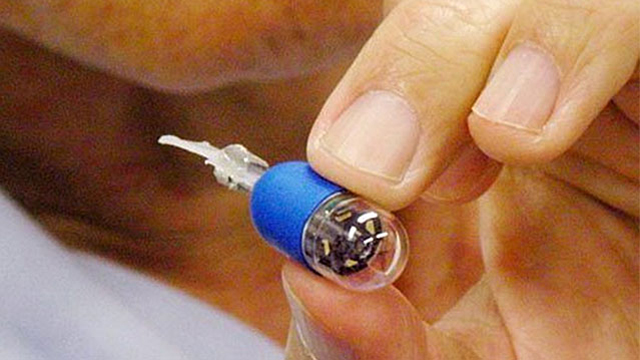 What you are seeing here is the Mermaid. Yes, it is a little one, but not the one from the Hans Christian Anderson fairy tale.
No, this one is an endoscopy device designed by a team of researchers from Ryukoku University and the Osaka Medical Collage, both in Japan. This two-inch long, half-inch in diameter device can be programmed to take photographs of the stomach or colon.
It can be controlled by a joystick, and can snap two photos per second. I would imagine that doctors can figure out what your digestive pain is. Just don’t ask how you get it inside of you. Let’s just say that if the doctor gives you a choice, then swallow it.
You know what this reminds me of? Fantastic Voyage, an adaptation of a classic science fiction novel by Isaac Asimov. That, or comparable eighties film with Dennis Quaid and Martin Short known as InnerSpace. In both films, a submarine-like vehicle was shrank to microscopic size and then placed inside someone. I saw an episode of Phineas and Ferb which explored this idea yet again.
Hey, if you don’t have a shrinking machine, then you might as well do the same thing by remote control.
Source