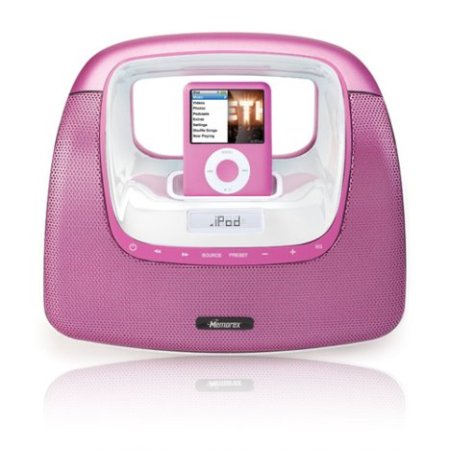 Just like millions of other iPod owners around the world, you are daily flooded with news of new iPod accessories, and if you haven’t yet selected an iPod speaker dock or boombox of sorts, you’re definitely spoiled for choice. There are literally hundreds of options available, but don’t simply go plonking down your hard earned cash on any model as the manufacturer’s brand name certainly has a part to play. Memorex might not be at the forefront where iPod accessories are concerned, but their miniMove portable boombox is worth looking into as it attempts to merge both form and function in a single device.

The Memorex miniMove debuted on the catwalk during New York fashion week late last week, although it has not been officially unveiled just yet. For those who are interested to know what the miniMove is all about, you will realize at first glance that this looks more like a futuristic purse than anything else, boasting a high-fashion design silhouette that has an integrated handle, making the task of toting your miniMove and iPod around a snap without looking overtly dorky. In addition to playing tunes off your iPod on the go, the miniMove also doubles up as a charger whenever your beloved iPod is docked within. Other features include an integrated digital FM radio for moments where you’ve actually run out of songs to listen to on your iPod, station presets, a line-in headphone jack for more private listening sessions, and a wireless remote control for folks who prefer to use the miniMove as a speaker dock at home instead.

Being highly portable means you don’t have to remain tethered to a power outlet at all times, but do make sure you have a healthy collection of rechargeable AA batteries to go along with the miniMove whenever you’re outside since you want to minimize the environmental impact at the same time. Each miniMove portable boombox will come in black, silver or pink colors and will retail for $49.99 when it ships this October. Why not surprise your girlfriend/wife with this chick-friendly accessory?