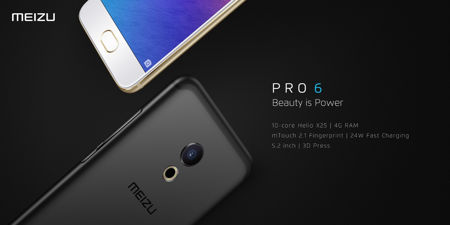 Meizu has just revealed their latest smartphone for the masses, which would be known as the Meizu PRO 6. This particular handset shows off Meizu’s breakthrough 3D Press pressure-sensitive display, fingerprint recognition as well as fast charging capabilities, in addition to the Flyme 5.5 operating system which will be able to offer an in-depth level of customization where Android 6.0 Marshmallow is concerned.

Through the application of 3D Press technology, the Meizu PRO 6 is able to perceive changes of pressure on the screen in real time alongside tactile vibration feedback and visual changes, before calling on the corresponding functions without having to launch an app, now how about that? This would mean that 3D Press is able to directly improve operational efficiency, as well as introduce more interaction possibilities.

Other popular apps in the vein of WeChat and Alipay have activated the 3D Press function, which would then enable the full use of the app’s services without even requiring to open it. There will be additional apps that support the 3D Press function in the near future, at least according to Meizu.

Apart from that, the Meizu PRO 6 will run on the Helio X25 flagship processor, which is a revolutionary 10-core 3-cluster architecture with 2.5GHz speed. The Helio X25 3-cluster structure can dynamically switch between modules according to different task requirements, and hence, has a lower power consumption of up to 30% less than a 2-cluster setup, resulting in a longer battery life. Other hardware specifications include a Mali TM T880 GPU, 4GB of RAM, eMMC 5.1 flash memory, a 5.2-inch Full HD display, a fingerprint sensor with a 0.2-second recognition time, and a choice of either 32GB or 64GB of internal memory as it arrives in a black, silver or gold aluminum alloy unibody. So far, there is no word on pricing, but it should go on sale in Hong Kong, Russia, Israel, Ukraine, the Czech Republic, and India.