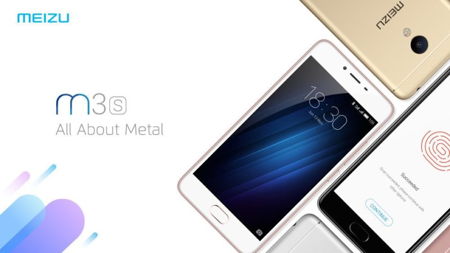 When it comes to quality smartphones that are not attached to a price tag that breaks the bank, you can be sure that the many names from China would fit the bill perfectly, although there is still much work that needs to be done on the software side of things in order to ensure that it will work efficiently and is on part with other more established brands in the market. Meizu is one of the China names that have stamped a mark for itself in recent times, with devices like the Meizu M3 note, and here we are with Meizu’s latest – the beautiful looking Meizu M3s.

This latest smartphone from the folks over at Meizu is certainly a looker, although some might think that it is somewhat dated in its form factor. From what we do know, the Meizu M3s will arrive in two flavors – 2GB of RAM alongside 16GB of internal memory, while the other variant would come with 3GB of RAM and 32GB of internal memory. On the outside, the Meizu M3s will boast of a smooth and delicate metal body, which was accomplished by using 360° sand blasting. Those who have set their hearts on the new Meizu M3s will be able to take their pick from a quartet of color options – namely silver, grey, gold and rose gold.

Your eyes will greet the 5” High Definition display without any issues, thanks to its full lamination technology. Not only that, there is the 2.5D glass design that delivers visual joy and while feeling great in the hand, and underneath the hood lies an octa-core A53 processor that will be able to roll out the relevant kind of performance in its class.

At the back lies a 13MP camera that is capable of supporting quick and automatic phase focusing, while various photography modes have been thrown into the mix as well such as long exposure or panorama mode. In front would be a new 5MP camera that has a large ƒ/2.0 aperture, ensuring that it can still do its job even in low light conditions.

Running on the Flyme OS that is based on Android 5.1 Lollipop, we do wish that it came with Android 6.0 Marshmallow right out of the box instead. Any takers?