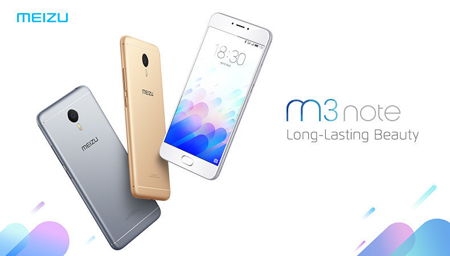 Meizu has had its fair share of smartphones released in the past, and this time around, it looks like the Chinese company is not going to stop anytime soon with a new handset. In fact, their previous releases such as the Meizu MX have been noteworthy devices, growing from strength to strength with each new release. Having said that, Meizu has recently unveiled their latest device, the Meizu m3 note.

Before we continue, let us take a look at the hardware specifications that are found in the Meizu m3 note – it will sport 16GB of internal memory with 2GB of RAM, while there will be another model that has 32GB of internal memory and 3GB of RAM – which are pretty much par for the course for smartphones in such a niche. With Meizu having picked up its fair share of experience in the use of metal technology during the manufacturing process, the Meizu m3 note embodies the high level of knowledge that they have with a brand-new metallic body sporting a near-perfect arc, ensuring that your hand will feel the Meizu m3 note in a whole new way as you choose from silver, gray, and gold shades.

Other hardware specifications include a 5.5” Full HD and full lamination screen, 403 ppi pixel density, packed in a 2.5D curved glass that delivers a more rounded vision and better sliding operation feel. A 13MP shooter at the back with a 5MP front-facing camera would complete the handset. Seems to be a very decent mid-range device to us!