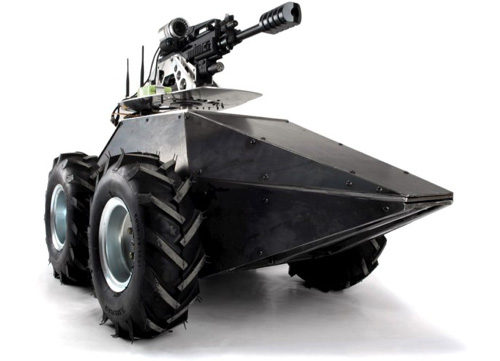 Before you start panicking at the sight of this monster, you should know that it is made to shoot only paintballs…for now.
This is the Mega Hurtz, and this battle-bot is designed to be piloted by remote control to take out as many paintball baddies as possible. It was designed by Chris Rogers, and it is equipped with video cameras and a remote with an LCD screen.
I realize that this photo doesn’t give a good idea of a size of this thing, but it weighs in at 280 lbs. I’m guessing that you’ll need at least a pickup track to haul this guy into battle.
Of course, once you let if off the chain, you’ll be able to use the red laser sights, night vision, and shoot opponents at a range of 500 feet.
Yes, you would probably dominate driving one of these. Of course, this thing has an Achilles heel. A few precisely aimed paintballs could take out the cameras which would leave the Mega Hurtz blind.
The Mega Hurtz is one of those Kickstarter projects. For those who aren’t familiar with Kickstarter, it is a place where inventors put their creations online, and ask for support. Perhaps he’ll get the support, and we’ll see this in military actions.
Source