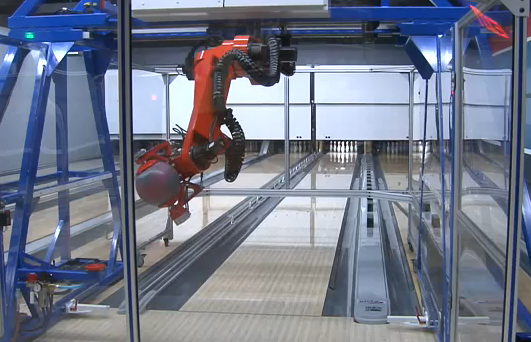 If they ever wanted to remake The Big Lebowski with robots, they would probably have to cast EARL in the film. I’m not certain if the bowling robot should be Jesus Quintana or The Dude.

EARL (Enhanced Automated Robotic Launcher) is a one-armed robot used by the Equipment Specifications and Certifications team of the National Bowling Congress to test gear.

EARL is one accurate robot that can hurl a ball from 10 to 24 miles per hour at 50 to 900 revolutions per minute, and make a consistent shot every time. Or so the creators thought. You might want to check out the video to see it go up against a professional bowler.

Here’s a Spoiler alert for the video. EARL recently showed up at the International Bowling Museum and Hall of Fame and bowled against PBA man Chris Barnes. It was a true man versus machine match like John Henry versus that hammering machine. The man won this time with 259 to 209, and the creators say that what caused EARL to lose is that it bowls consistently every time. Apparently, it scratches the oil on the floor and messes with Earl’s game.

Still, if I were a part of a bowling team, I would definitely want EARL on my side.