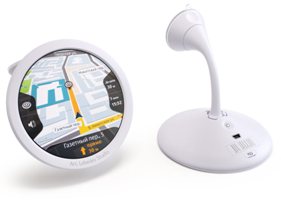 If you aren’t familiar with Russian Designer Art Lebedev, then perhaps you have heard of the Optimus Maximus, the keyboard with a screen for every key.

It would appear that the innovative designer is working on another device that has become common: the GPS device. His “Navigarius” uses a round display as opposed to the traditional square models. It also includes touchscreen controls, USB connectivity, a microSD reader, as well as a cigarette lighter adapter.

I can think of other features that my source does not list off. For example, voice recognition. However, that’s starting to become a standard on many GPS devices these days, especially with those cars with it built-in.

At the risk of gadget-gushing, I will have to say that I love it. Personally, I think this design will probably be picked up, and quite soon. In fact, I think that its design is so revolutionary, that I could easily see it on every dashboard in the future.

So are we looking at an age where we see a GPS device with a rectangular screen and say: “oh, that is so quaint”. Do you remember just ten years ago, when all of our computer displays were huge and square. Flatscreens changed all that, and I see the same potential for the Navigarius.