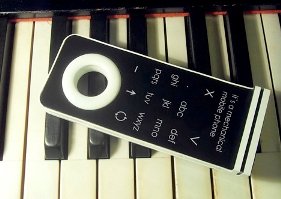 I’m sure you can tell by the picture that this is a concept product, for now. If you haven’t figured it out yet, then read the fine print, starting with the label that says: “It’s a mechanical mobile phone”.

This Mechanical Mobile phone was designed by a Russian designer named Mikhail Stawsky. See that ring in that picture? Apparently, you can spin it, and it will give you enough juice to make a call.

You know what it reminds me of? Those cowboys that you see in the movies who can spin their gun around their finger. I’ve always wanted to try that, but I couldn’t get it to work with a toy gun. Not going to try it with a real one.

This is still a concept for now, but I have another take on this idea: the yo-yo phone. Think of it as a phone with a string that has to be “yo-ed” in order to charge it. Then, when it is time to make or take a call, just clamshell it open.

Maybe I should trademark this idea before someone invents it already. Until then, I have this blog as evidence that I have hopefully thought of it first.