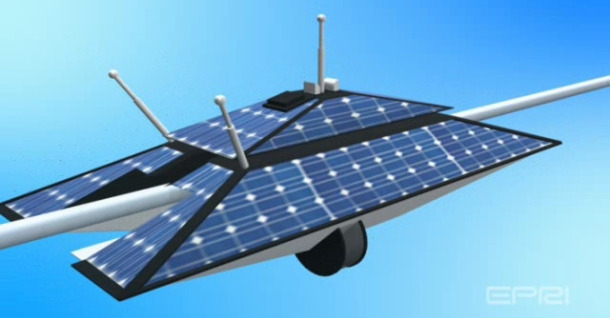 What we are seeing here is a cable crawler, which is designed to check for cable defects and problems in power lines. Such problems in the power lines can range from overheating to cable noise, and then relay that data to utilities via satellite and cellular phone signals.

You can see the solar panels on the thing, which is all right when it is sunny, but it has a backup power system. I believe that it can also gain energy from the wires that it is traveling on.

It looks like it travels along like a zip line, and it is bigger than it looks at six feet long. It is also heavier than it looks as this apparatus weighs about 140 pounds. So it can zip along at about 3 miles per hour, and designed for covering 160 miles a year. This could cost utilities less than $500,000, which is a lot cheaper than usual.

They want to do initial testing for later this month, with full-fledged trials in 2014 along the 275-mile on the Potomac-Appalachian Transmission Highline. I have a quick question though. I’ve seen these powerlines on poles, and I don’t see how I can get the robots to go from pole to pole?