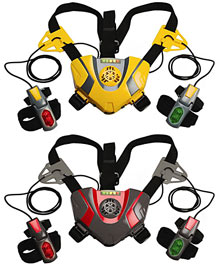 When I first saw this I thought it was going to be a game like laser quest, was I wrong! Mazu Kan lets 2 players battle it out like real superheroes.

To play each player wears a Mazu Kan harness around the chest and the actual controllers on each wrist and hand. In order to attack your opponent you need to squeeze a palm button and punch into the air (shouting some superhero chant at the same time). This then sends a attack to your opponent who must block or be docked points (indicated via a vibrating harness).

After a bit of practice you can play the game at a harder level which allows more advanced moves, like the Double Power Punch and Force Field.

So if remote control robot boxing isn’t your cup of tea check out Mazu Kan, available from Think Geek for $49.99.