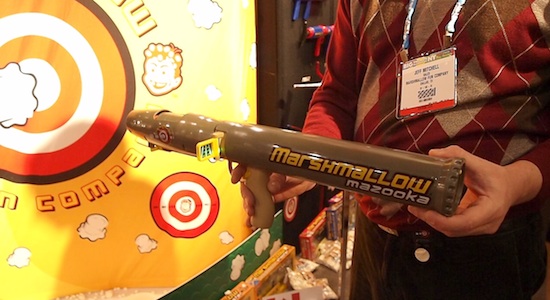 Years ago, I got these marshmallow shooters as a Christmas gift. They were just skinny PVC pipes, and I had to put a tiny marshmallow in one end and blow out the other. I hope my mother-in-law didn’t spend that much on them, because I don’t recall using it much.
Someone has taken this concept of the marshmallow gun and mixed it with some technology to make it better. The end result was the Mazooka, which is apparently some sort of combination of the words “marshmallow bazooka”.
It is a definite step up from the marshmallow gun that I briefly owned. Mine shot the tiny marshmallows that get put in cocoa, but the Mazooka can shoot the giant sized marshmallows. It can propel them from 30 feet away, which is enough time for you to make a good run for it when you hit your target. However, I’m not certain your target will notice a hit from something so light and puffy.
The Mazooka is run on batteries, but my sources does not say what kind. The batteries power the gun as well as a viewing scope light that turns red when it is pumping up, and then green when it is time to fire. It takes about five to eight seconds to power up, by the way.
The Mazooka costs about $50, and I am not certain it is worth it, as it only shoots one marshmallow at a time.
Source