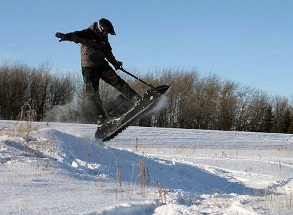 If you can’t wait until summer to try the Chariot Skates, then you may might want to see this product that is made for the winter snow.

The MATTRACK can best be described as a scooter, but with a tank tread instead of wheels so it will go through the snow. It has a handle on it so it can steer, and the frame is mounted on a tread in a way where the user can lean to make turns as well. There is a video of it in action after the jump if you want to see it for yourself.

It is designed for the winter sports enthusiast like snowboarders, but the MATTRACK doesn’t have any thing to clamp to the user’s feet. Instead, it has a metal grill of a thing that ought to hold the rider. If the rider falls off, there is a tether to turn off the power so the MATTRACKS doesn’t go away from the rider.

The MATTRACKS also has come convenient carrying handles so the user can tote it around easily enough when he or she is not on the snow.

I have no idea what this thing runs on, nor how much this costs. All I know is that it looks like a lot of fun, and I’m probably going to get a lot of snow this year. Why shouldn’t I have fun with it on a MATTRACKS?