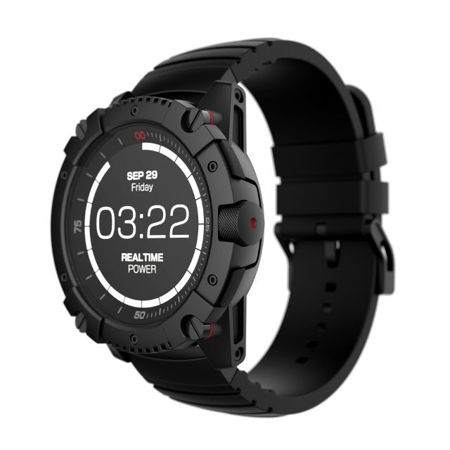 Most of the time, we would think that a watch is powered through one of three methods: the traditional button cell battery, kinetic energy, or solar power. Matrix decided to take the road less traveled with a no-less adventurous timepiece known as the PowerWatch X, allowing it to run on one’s body heat alone. It is starting to sound as though we are entering an era like the Matrix, where we humans end up as “batteries” for the machines. Still, Matrix’s PowerWatch X is something that boggles the mind, where it will be powered by the wearer’s body itself, which is made possible by a proprietary thermoelectric energy converter.

Make no mistake about it, the PowerWatch X was specially designed and built for those who have an adventurous streak to them. It sports an aircraft-grade aluminum body that ensures it remains nice and light, while having a purposeful bulk that will maintain its rugged tactical look and feel. The wearable itself does not require any charging on the wearer’s part, and it will arrive standard with up to 200M of water resistance, which is something that other similar battery-powered fitness wearables offer. The beauty of the PowerWatch X? You do not have to grapple around with the hassle of annoying chargers and messy cables.

Whenever you do not wear the PowerWatch X, all data that it carries will remain stored in its memory as it goes to sleep. When you do decide to pick up the PowerWatch X and slap it around your wrist, it will turn right back on at where you last left off. Matrix claims that the PowerWatch X is able to last for up to two years in idle mode, now how about that? It comes with companion apps that will run on both iOS and Android platforms to deliver additional customization, tracking and insights. The PowerWatch X can be pre-ordered for $249 apiece, any takers?