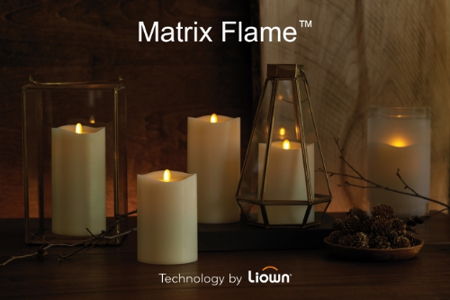 If you were to tell someone who lived in the first quarter of the previous century that you come from a future where cars do not need any drivers, and that man has already been sent to the moon – and back, safely, you would most probably get an incredulous look and perhaps even a physical action that depict you being nuts, or contacting the nearest asylum to see if they are missing any inmates from there. So too, will you get a similar treatment if you were to put forward the idea of a flameless candle. Thankfully, technology and science have progressed at such a rate that all of the above mentioned are not only possible today, some of them have been achieved many decades ago already. As for flameless candles, this premise is being presented through the Matrix Flame this time around, where it claims to offer the soft, romantic look sans dangers of an actual flame.

Liown Electronics Co. Ltd. happens to be one of the world’s largest suppliers of light-emitting diode (LED) flameless candles and lighting, and it goes without saying that they are offering the most unique and revolutionary flameless candle that the marketplace has seen to date, which is none other than the Matrix Flame.

The Matrix Flame will make use of 76 micro LEDs in the tip, where this allows the candle to continuously cast a flame that varies in appearance. Such a rapidly changing flame would mean your eyes are fooled into thinking that it is looking at the most true-to-life flicker ever invented, and it does not really matter as to which particular angle you are looking at it from – the realistic effect would remain the same, resulting in a stunning – and safe ambience.

The Matrix Flame has already rolled out in Europe, and is making its way to the US this month. It will sport programmable settings that can be used adjust flame movement, where you have up to 700 hours of run time on a pair of D batteries, an On/Off and five-hour auto timer feature, and a remote feature that lets you change the movement from calm to breezy, making it safe to be used indoors or outdoors, and near children and pets.