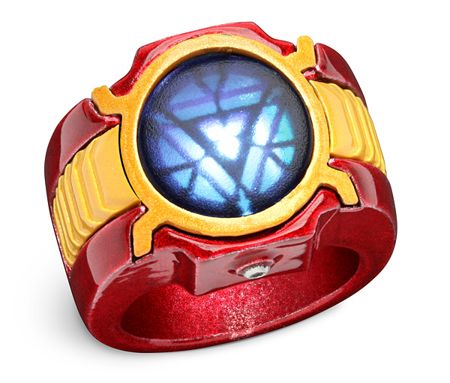 Fictional billionaire Tony Stark is notoriously known to be extremely poor when it comes to choosing and giving gifts, at least this is what we have gathered from the Iron Man movies on the silver screen so far. This does not mean that you should emulate him in this matter, and if your other half has a huge love and admiration for this all-too-human superhero from the Marvel Universe, then you might want to get them the $44.99 Marvel Iron Man 3 LED Arc Reactor Ring.

The Marvel Iron Man 3 LED Arc Reactor Ring will not be able to power up an entire building with green energy, but it will still be able to light up thanks to its built-in batteries. Made out of solid metal alloy and accompanied by an enameled metallic finish, all you need to do is give it a tap, and it will begin to glow in a bright white manner. This particular accessory will glow for a full minute after being tapped, but unfortunately, it is unable to shoot repulsor beams – which is a good thing too, actually, since you might never know what kind of havoc can happen if that were to be a feature in the Marvel Iron Man 3 LED Arc Reactor Ring.