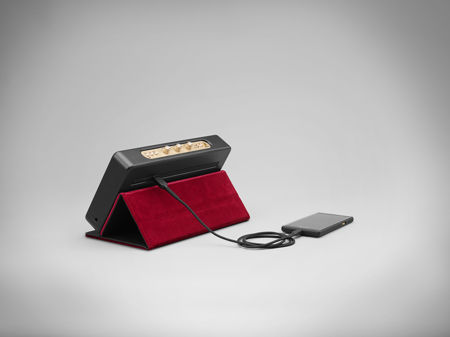 Whenever one travels, there would be a need to keep oneself occupied. Of course, the other alternative would be to sleep, but that would be missing out on the sights and sounds of the journey. Some of us would keep ourselves occupied with a good book, while others might prefer to watch a movie, although I am quite sure that other than sleep, the other common denominator would be to listen to music. Now, one’s musical tastes can be very personal, as it differs from one person to the next. The thing is, a pair of headphones is often the medium of choice for you to listen to your favorite tunes, but there are times when a travel speaker is required – which is where you will need to scout around and see whether there is anything suitable out there. Marshall knows this, which is why they have just announced their new Stockwell travel speaker that looks to be a decent candidate for general needs.

For starters, the Stockwell from Marshall has been specially built to work on the road, being the smallest travel speaker ever to roll off from Marshall’s production lines. It will also tip the scales at 1.2kg (2.65 pounds), making it light enough to be carried around to just anywhere. You will be able to make use of the Stockwell as a standalone speaker, or it can also function alongside a multi-functional flip cover, where the latter will need to be purchased separately at $40 a pop.

Those who are interested in the Stockwell will be able to pick it up some time in Q4, as that is the window period in which it will ship, retailing for $229 apiece sans the aforementioned flip cover. In terms of its performance, the Stockwell does not shirk away from its responsibility as it packs a sonic punch, boasting of a pair of 2.25” woofers as well as two-channel Class D amplifiers, making it is the loudest speaker in its class. Volume, bass and treble are able to be adjusted in a jiffy thanks to the retractable analogue control knobs that are conveniently located at the top of the speaker.

You will also be able to make use of the Stockwell to receive and end phone calls, where all you need to do is to tap the phone button on the control panel in order to answer, or tap the on/off button to end a call. It will connect via Bluetooth 4.0 technology and a 3.5mm jack, with its rechargeable lithium-ion batteries offering up to 25 hours of playing time.