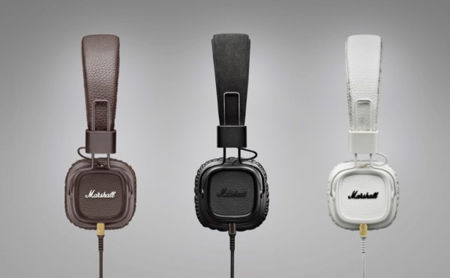 Having a good pair of headphones to listen to your favorite music is definitely important if you were to pick up the various nuances in a particular tune or riff, and for those who have yet to pick up something that is of quality, perhaps it is time for you to give it a shot. Why not do so with Marshall Headphones’ latest effort, where they are offering the Major II that will come in pitch black, white and brown colors? In fact, starting from March 25th, the various colors of the Major II headphones will hit over 90 countries, making it a true global superstar.

There is a very good reason for calling this the Major II, since it has started to shape up to be a real impressive second act. Not only do you get updated sound, the looks have also been given a run through, not to mention increased durability and improved ergonomics which will certainly give way to a whole new level of listening.

If there is one more adjective that you might want to throw into the mix where the name of Marshall Headphones is involved, then rock-solid character would be one of them. The Major II is no doubt built to last, where it offers advanced sound features that include customized drivers, allowing it to deliver deeper bass as well as additional extended detailed highs with a refined mid-range and overall lower distortion. There will also be a detachable double-ended coil cord with mic and remote that comes equipped with an L-plug end, so that you get to enjoy improved durability and carrying ease.

The intentional presence of dual 3.5 mm jacks would then give you the freedom of choice to pick the side on which you prefer to wear your cable on, or simply to plug in and share your music with a friend.