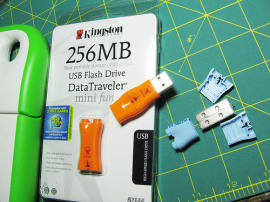 Have you ever seen The Incredible Hulk movie? Not that bad one starring Eric Bana with its strange editing, but the halfway decent one starring Edward Norton.

I bring it up because in the film, Dr. Banner (Norton) is about to become the Hulk, but he has some valuable information on a thumb drive. In order to protect the valuable data from his enemies and himself, he decides to swallow it. After he calms down from becoming the big green monster, he later regurgitates the thumb drive.

I’ve always wondered if someone could swallow a thumb drive, barf it up, and use it later. It would appear that we are going to find out as someone actually did this, in real life. Find out the situation after the jump.

A man named Florin Necula (sounds Transylvanian, I know) apparently had some incriminating evidence on a flash drive and decided the only way to dispose of it was to eat it. Necula was arrested for using card readers to gain magnetic strip information from cards that are inserted into ATM machines.

A few days after Necula was arrested, he finally agreed to have the information removed. Who knows how, but I’m guessing that you’ll need surgery. Yeah, I still don’t know whether you could vomit up a thumb drive. After four days, I would think that the drive would be partially digested.

In The Incredible Hulk movie, the thumb drive was in Norton and the Hulk for only a few hours, and the data could be retrieved. I believe he had the SanDisk brand, but Necula swallowed a Kingston. Let’s see if it survives.