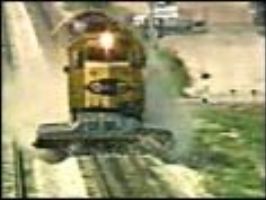 Is it possible that we are beginning to trust our GPS devices more than our own eyes? It kind of reminds me of that scene in The Simpsons Movie where the government wipes Springfield off the map by removing it from the GPS devices.

I’ve heard of at least one accident that proves that we will do as the machine says. This happened when a computer consultant followed the instructions on his GPS and turned right. Of course, any driver with a GPS might do that, but this one ended up on some train tracks, and he was unable to remove himself from it.

To make matters worse, a train eventually came. Man, is that just Murphy’s law, or what? Despite the driver’s attempt to warn the engineer by waving, the train still hit the car at 60 miles per hour, propelling it a distance of 100 feet.

This is one of those accidents that, if I were an insurance agent, I wish I could have seen. I would see if the train tracks were something that would be obvious not to drive on. I also would want to know if the train was coming right away, as you would think no one would ever turn on a train track that was occupied.

I just want to say that I’m going to be driving to Las Vegas for CES tomorrow, and I might be relying on a GPS. I will definitely be on a lookout for oncoming trains. Oh, and another thing: the photo here is just some stock photo, not the one at the actual accident.