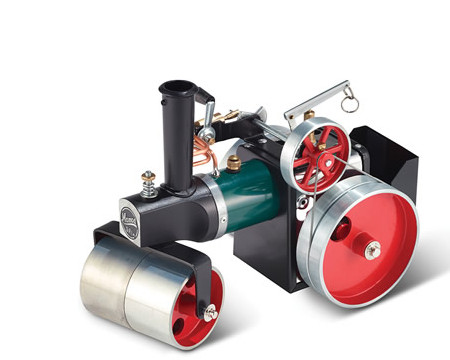 To be able to know how stuff works, now that is certainly the hallmark of an inquisitive mind, that is for sure. Well, if you would like to roll back the years and see how a 19th-century steamroller functions, then you would not have to go very far back in time, and neither do you need a DeLorean in order to get things done, as we now have the $249.95 Mamod Steamroller, which happens to be a working model of a 19th-century steamroller that was made by famous English toy manufacturer Mamod.

Steamrollers happen to be a product of the Second Industrial Revolution, where they stamped their mark upon an age when Britain’s transportation infrastructure ended up as the blueprint for the empire’s financial success back in the day. This is a model that happens to be a modern reproduction of one of Mamod’s steam-powered toys which were first introduced in 1961, and it is an amalgamation of the different full-sized steamrollers that operated during time by manufacturers Aveling and Porter, John Fowler & Co., and others. Working in the same manner as that of its forebears, this particular model will be able to accept just about any ordinary tap water that is poured into its boiler, where a couple of its 20 included fuel tablets will then be placed into its burner tray heat the boiler’s water supply, providing up to 15 minutes of operation. A pull of the flywheel starts the engine with a pleasant putter and it travels in the direction you indicate using the control lever and steering rod, while a working steam whistle comes to life with every pull.