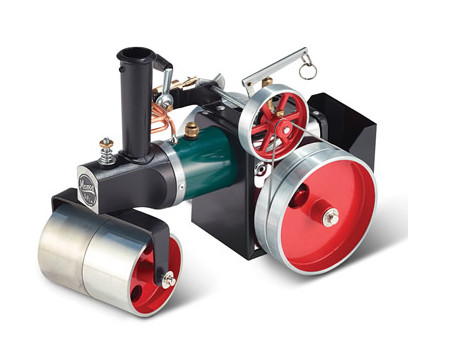 It has been said that there is nothing new under the sun – it is just the same old things happening to new people. Well, for those of us who happen to have a penchant for stuff in the past, here is a working model of a 19th-century steamroller made by famous English toy manufacturer Mamod. It will definitely cost a whole lot more than the original steamroller if you were to discount the inflation factor, where the $249.95 Mamod Steamroller is a modern day reminder of a relic from the past which marked an age when Britain’s transportation infrastructure paved the way for its financial success.

This particular model is a modern reproduction of one of Mamod’s steam-powered toys that was originally introduced more than 5 decades ago – in 1961, to be exact, where it happens to be an amalgamation of the different kinds of full-sized steamrollers that operated during time by manufacturers Aveling and Porter, John Fowler & Co., and others. It even pays homage to its forebears by accepting ordinary tap water that is poured into its boiler. There are 40 fuel tablets provided, where placing a couple into its burner tray would be enough o heat the boiler’s water supply. Following that, give the flywheel a pull to kickstart the engine, and it then travels in the direction you indicate via the control lever and steering rod. This is like a far more interesting thing to have than the Miniature Brass Steam Engine.