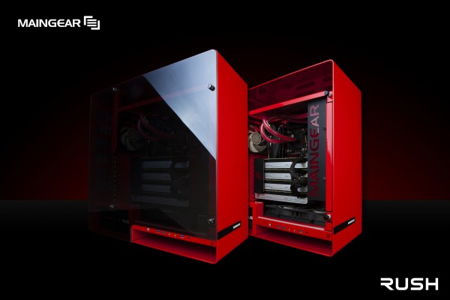 Gamers do take their hobbies very seriously, and this would also mean having the right kind of hardware to power their gaming habit. The thing is, with so many different manufacturers out there in the market, just which particular model would be the right one? Alienware’s Aurora has certainly impressed when it was released, and MAINGEAR does not want to be left out of the picture either, which is why they have announced the availability of the RUSH, which is an elegantly brutish gaming desktop that boasts of a tempered glass body, origami wiring, advanced cooling design, and state-of-the-art components.

Specially designed to demolish gaming benchmarks without the need for a traditional fierce gaming desktop look, the MAINGEAR RUSH will boast of the elegant side of gaming desktops via a tempered glass chassis that is highlighted by ultra-clean lines, expertly crafted wiring, advanced and customizable liquid cooling options, and artistically positioned components. It is truly a work of art as it has been individually hand-assembled, letting the RUSH delivers unmatched performance despite being placed under a load of stress with EPIC SUPERSTOCK Liquid Cooling.

MAINGEAR’s signature cooling system will boast of dual pumps to get that extra bit of reliability, and it has an easy to fill extra-large reservoir with a separate backup reservoir. All those are crucial to ensure that Intel’s Extreme Edition Haswell-E or Skylake processors will work seamlessly, accompanied by up to 3 NVIDIA GeForce GTX Titan X or AMD Radeon R9 Fury X GPUs, with half a dozen hard drive bays, and NVMe SSDs. Apart from that, gamers who want to love to live life on the edge always can maximize their system with MAINGEAR’s REDLINE, which is a factory tested overclocking service that safely pushes the system to maximum potential. And you have got to admit, the looks alone are a killer that is worth the entry price.