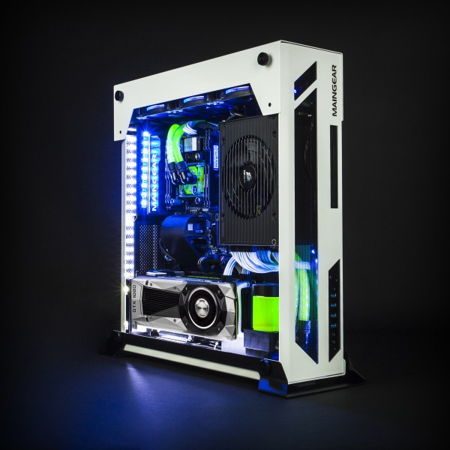 When it comes to gaming machines that you have in the comfort of your own home or dorm room, you can be sure that there are dime a dozen models to choose from, not to mention other people who would very much prefer to build up their own machine from ground up using various types of components. Well, Maingear has decided to up the ante with the new Intel Broadwell-E Processor as well as NVIDIA GeForce GTX 1080 GPU, which would certainly make it a machine not to be trifled with right from the get go.

This would mean that the Maingear machine will feature Intel’s very first 10-core desktop processor and the most powerful solution for gaming and content creation, where the Core i7-6950X boasts of drop-in compatibility with Intel’s X99 chipset as well as offers up to 88% more performance when compared to other models. If one were to ensure that it is properly optimized, then the new processor delivers excellent scalability with 40 PCIe 3.0 lanes, supports up to 4 discrete graphics cards and 4 channel DDR4-2400 memory, and Intel’s 750 NVME PCIe based storage solutions.

Not only that, NVIDIA knows that Virtual Reality (VR) is the future, which is why it has based on the new Pascal architecture for their NVIDIA GeForce GTX 1080, which will pump out stunning visuals while remaining cool and quiet thanks to an astounding 2560 CUDA cores, an ultra-fast 8GB GDDR5x, and a radically redesigned vapor chamber cooler. Being the latest and absolute best option for VR, the new GTX 1080 can see action in 2-way SLI for the ultimate performance, and will be accompanied by an array of advanced gaming features, including support for DirectX 12 and VRWorks for smooth VR audio, physics, and haptics.

With NVIDIA’s GTX 1080 delivering the best 4K and VR gaming experience, you can be sure that Maingear’s range of cutting-edge gaming desktops that will run on Intel’s Core i7-6950X processors and NVIDIA’s GeForce GTX 1080 GPU should be looked into seriously if you would like to gain an edge over the competition in the virtual arena.