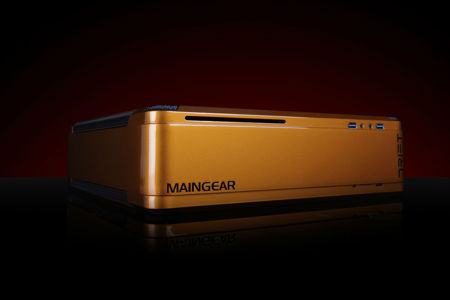 Maingear is a name that many of us would associate with the churning out of gaming oriented computers (both desktops and notebooks, of course), and this time around, Maingear has decided to embark on a slightly different path with the unveiling of the Drift. The Drift is not some sort of interdimensional portal, but rather, it is a Steam machine as well as a gaming PC that has been specially designed in order to deliver a level of unparalleled gaming performance despite being located in compact spaces.

Needless to say, the Drift will pack some of the latest in gaming technology, where among them include an Intel Core i7-4790K CPU and NVIDIA GeForce GTX 980 or AMD Radeon R9 290X GPUs. It is said that the Drift is more than capable of delivering pixel-shredding performance which will rival other full-sized desktops, except that this bad boy would arrive in a console-sized unit instead. This compact speedster will have the equivalent of an F1 engine that features a stylish unibody aluminum chassis that is whisper quiet, made possible courtesy of an Epic 120 Liquid Cooling system and superbly designed airflow.

Just how is it possible for Maingear’s Drift to deliver 4K gaming to the living room despite the extremely squeezed out form factor? Well, it has a versatile design that enables it to be placed both vertically or horizontally, not to mention being able to support up to 16GB of DDR memory, with the ability to carry a pair of 1TB SSDs and a 6TB HDD, now how about that? Do not think that the list of goodies stop here, since it is also full well capable of being fully upgraded and customized thanks to Maingear’s true automotive paint finish available in any color and combination.

Those who are interested to giving the Drift a go will be able to place a pre-order with or without an operating system, with prices starting from $849, where you can also configure it to boot directly into STEAM big picture mode with Windows. As for the Drift Super Stock edition, that model will arrive in a special bodyshell travel case and a STEAM OS version, and will be released later this coming November.