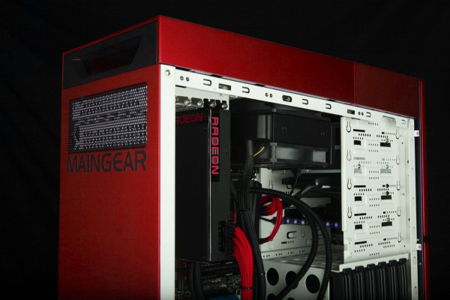 A gaming machine can be quite tricky to assemble – especially when you have to make sure that all of the parts are compatible with one another, especially when you build it from ground up. Well, perhaps there is a chance for you to check out what Maingear has in store for PC gaming enthusiasts (as well as basically anyone else who would like to have quick a punch underneath the hood in terms of graphical prowess) with the AMD R9 Fury X GPU being more than capable of pumping out astounding graphics complete with a revolutionary High-Bandwidth Memory (HBM) technology that claims to be able to offer 60% more bandwidth than GDDR5.

In other works, HBM will stack DRAM in a vertical manner in order to have it maximize space and speeds, which would result in enormous advantages in latency in addition to throughput – and those will be able to guarantee smooth visuals despite being at maxed out settings.

You should not be able to worry about not having the right amount of smooth framerates any more when you have the Radeon R9 Fury X GPU running within your PC chassis since it promises to deliver world-class gaming experiences, and it also has the ability to be pushed even further with even having to go through the overclocking process. In fact, it will come with an unprecedented design flexibility as well as scalability, boasting of a GPU Tach activity meter and LED illumination, and has been specially engineered for DirectX 12 and Vulcan.

Those who are interested in picking up AMD’s Radeon R9 Fury X GPU will be able to do so – with the added advantage of having it available for customization thanks to select Maingear desktops, including the award-winning Shift. Do take note that Maingear also does offer NVIDIA GPUs as well just in case you prefer to bat for the other team.