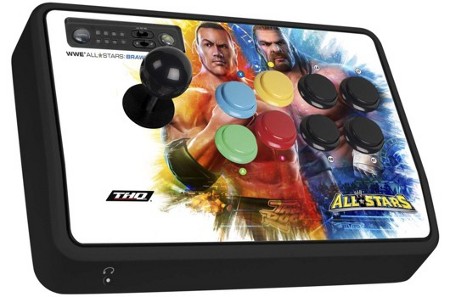 Mad Catz has long been a leading brand name when it comes to video game accessories and peripherals, and their latest foray into the world of video games would come in the form of the Mad Catz BrawlStick and BrawlPad, where either one of them is slated to high octane WWE action to life, letting you lay the smack down right in the comfort of your living room. Both of these will be more than suitable for recreating signature moves of the WWE Legends and current WWE Superstars. Of course, get these only if you’re a huge fan of entertainment wrestling, as the game itself, WWE All Stars, was specially developed to deliver one of the greatest rosters ever assembled in a WWE videogame. WWE All Stars will be able to roll back the years and bring the stars of yore through a time travel machine, where you can hold fantasy matches between WWE Legends and current WWE Superstars to answer the nagging question of who is the “greatest of all time”.

The official WWE All Stars Arcade BrawlStick will be available for the Xbox 360 and Sony PS3 consoles, and regardless of which platform you are rocking to, you will be able to find precision control and quality engineering in either accessory, boasting official artwork from the videogame which depicts WWE Superstars and WWE Legends. There is also a useful dual-speed Turbo functionality for each button, and LED indicators let you know whether it is toggled or not. Gamers worth their salt should be able to execute moves with impressive speed, while the eight-button arcade configuration ought to make larger-than-life moves performed with precise execution. Of course, for those who are more comfortable with a D-Pad can always switch over in a jiffy to alternate between that and analog sticks for maximum control flexibility. Sounds like a pretty good deal at $79.99 a pop.
As for the official WWE All Stars BrawlPad, this $39.99 purchase will target gamers who want a traditional console controller without wishing to compromise on features. It will sport an ergonomic design with an enlarged circular eight-way floating D-Pad and arcade style six-button configuration, while carrying a similar integrated D-Pad switch as with the BrawlStick. Both peripherals are tipped to ship worldwide to coincide with the game’s launch which is happening on March 29, 2011 in North America and April 1, 2011 throughout Europe (hopefully that won’t be an April Fool’s prank!).
WARNING: PDF LINK – Press Release