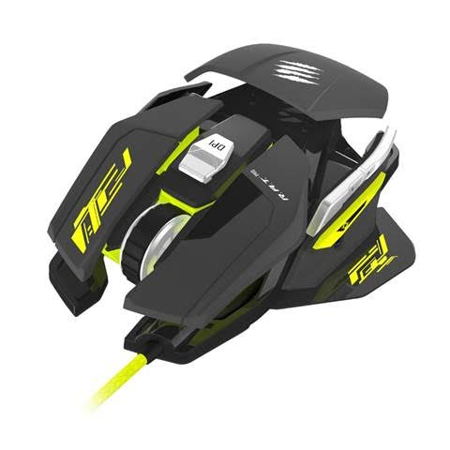 Gamers can be a very spoiled bunch. After all, they tend to have this particularly irritating blind spot, which would involve blaming everything and everyone else around them whenever they have an off day in terms of performance as opposed to seeing where their own abilities, or rather, the lack of it, has let them down. Hence, you see hard core gamers investing plenty of time as well as hard earned cash where hardware is concerned, often seeking out the latest and greatest device to give them a perceived edge in the fierce competition with the others. Gaming mice happen to be a hardware segment that is well visited, and this time around, we have the Mad Catz R.A.T. PROs Tournament Grade Gaming Mouse that has just been announced.

The Mad Catz R.A.T. PROs happens to be a Windows 10 compatible gaming mouse that will clearly target competitive gamers, where it will boast of a lightweight profile and come with a slew of customization options along the way. You should be able to see it enter tournament play in due time if more and more gamers were to adopt it as their gaming device of choice, and it is tipped to ship in time for the holiday season – which is a good thing, of course. In fact, the R.A.T. PROs boasts of a striking visual design that takes its inspiration from the critically acclaimed R.A.T. PROX. Apart from that, tournament level gamers happen to have had their fair share of input into the creation of the R.A.T. PROs, where key features and components essential for competitive play have been thrown into the mix.

For starters, you get a high-performance 5000 DPI Pixart PMW3310 infrared optical sensor that powers this lightweight mouse, where it tips the scales at a mere 77 grams, allowing it to glide effortlessly atop PTFE feet. Not only that, other customizable features will include on-board memory with up to three custom profiles, allowing it to be the ideal mouse for eSports tournaments. There is also Mad Catz’ free auto-profile software which will automatically switch to the gamers’ preferred profile upon detection of their chosen game, now how about that for being smart? Any takers?