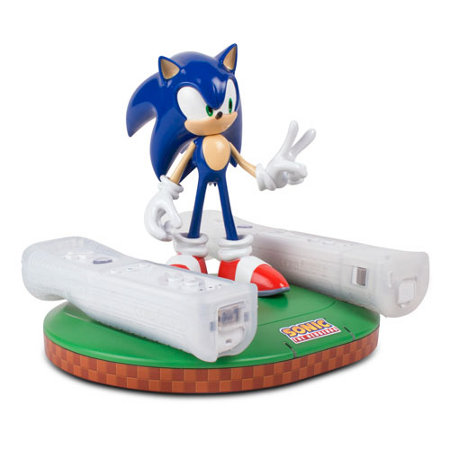 When Nintendo had Mario breaking bricks and crushing turtle shells all over the place during the 1980s, they had a rival in the making when the 1990s rolled around – we’re talking about the world’s fastest hedgehog, Sonic. Of course, this spiky blue mammal had a pair of trainers that doesn’t seem to wear out no matter how fast he zips and rolls about a level, collecting gold rings in the process. Clearly Mario had the better economic sense, as gold coins contained a whole lot more value compared to rings that are hollow on the inside. Ah well, Mad Catz, the company behind a wide range of video game accessories, has come up with a limited edition Sonic the Hedgehog Figure Inductive Charger.

What does this special limited edition figure offer for the jaded gamer? Well, apart from featuring a six inch tall Sonic, it also boasts a charge base for use with the Nintendo Wii video game system. It has already started to ship, so you need not worry about whether it is available on store shelves or not, just look out for it under the company’s Mad Catz casual gaming brand. For those who are more well versed with the rest of Mad Catz’s range of accessories, it will complement the officially licensed Sonic the Hedgehog video game accessory range and is revealed to the masses in time to celebrate Sonic’s 20th Anniversary. Since it is a limited edition release, each purchase is individually numbered, and might even end up as a highly-collectible method for storing and charging up to two Wii remote controllers.

Wii remotes will charge up silently atop a green plateau that represents the classic ‘Green Hill Zone’ which fans will definitely recognize and appreciate, never mind that the last time they played that game was nearly a couple of decades ago. The inclusion of built-in magnets will ensure controllers and battery packs are aligned in the most efficient charging position possible whenever the rechargeable NiMH battery packs rapidly energize themselves to deliver up to 15 hours of game play. Thanks to an innovative electromagnetic induction technology used here, you can always juice up your Wii remotes without having to remove its protective protective silicone covers or Wii MotionPlus add-ons. The Sonic the Hedgehog Figure Inductive Charger by Mad Catz will retail for $49.99 a pop.