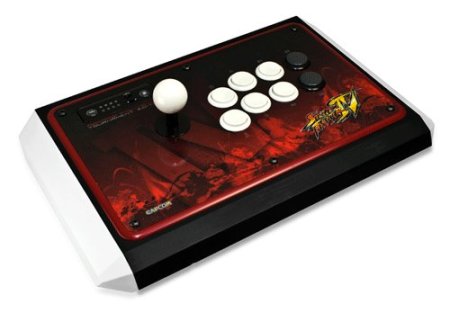 Mad Catz is a company that is well known for its range video game accessories, and they have gotten on board the Street Fighter bandwagon with its new range of accessories that are tipped to be released in time for the franchise’s first next generation release sometime next month. As anyone who grew up during the furious arcade years where Street Fighter II was king, they would remember fondly of the six button joystick setup, and this time round you can expect the new accessories to offer a similar support that caters to the game’s unique button mapping in order to enhance gameplay for both casual and dedicated fans without pinching the pocket too much.

There will be three different accessories available, and first off, we will have a look at the official Street Fighter IV Arcade FightStick that is available for the Xbox 360 and PS3. Specially designed to offer authentic arcade style play, this Street Fighter IV Arcade FightStick will bring precise control and quality engineering, complete with stunning official artwork to make the home arcade experience as authentic as possible. Hopefully when they say quality engineering, they mean that it is able to withstand frustrated pounds against the FightStick’s body when one loses a crucial round.

Next up is the official Street Fighter IV FightPad, again, for both the Xbox 360 and PS3 consoles. If you were wondering why the Wii is missing out on the action, that’s because Nintendo’s console doesn’t have the relevant graphical firepower to handle Street Fighter IV, and besides, wiggling your way through to victory just ain’t as cool as a controlled joystick/joypad performance. Back to business – the FightPad targets gamers who prefer a tradition console controller without having to compromise on features, boasting an enlarged circular eight-way floating D-Pad and arcade style six-button configuration. The integrated D-Pad switch offers gamers the option to alternate between D-Pad and Analog Sticks as and when they want.

Last but not least is the official Street Fighter IV Arcade FightStick: Tournament Edition, again for the two consoles mentioned. This was specially developed for the serious Street Fighter enthusiast, and its development was overseen by Capcom and legendary producer Yoshinori Ono. Hardcore gamers will definitely appreciate the Tournament Edition that boasts an unparalleled level of detail and uses arcade quality components – guess bashing your fist against it when you lose shouldn’t be a problem, although having the best version of the lot, you might think twice just in case you might damage it accidentally. There is no word on pricing for all three at this point in time, but we’ll all find out this February, no?