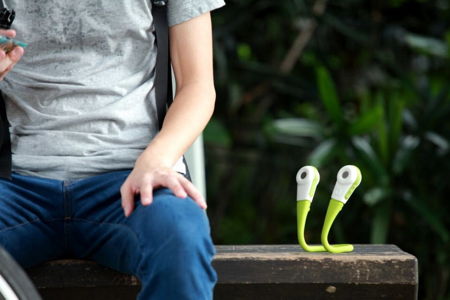 Have you heard of Music Wrap before? Chances are the answer would be in the negative. Music Wrap is, after all, an innovative start-up in the music experience industry, where they have just made an announcement concerning their most recent product known as the M25, and it will hopefully be made available to the masses should the crowdfunding project be a success. Those who are interested can pick it up for $69.99 when it becomes available, although limited early bird rewards will make it available for as low as $35.

Before we continue any further, we would like to put it on the record that the M25 does resemble the early ancestor of the chest-burster from the Alien movie franchise fame, which was a worm-like creature with teeth as depicted in Prometheus. Having said that, the M25 will not be a biological agent of war, but rather, it has been described as a dedicated “personal sound field” that brings music to life without having to sacrifice the user’s awareness to his or her surroundings.

Boasting of a design that detaches itself from the ear would reduce the chance of injuries to the human eardrum, making it ideal for the little ones around your home, teenagers, or anyone who is tired of earbuds and traditional headphones. The ergonomic product design ensures that all the essential control buttons are at the fingertips, and with the optimal length, the M25 will be able to sit perfectly around the neck, freeing up the user’s hands and ears without having to sacrifice the overall listening experience.

In other words, one can enjoy music and also be aware of the potential dangers that might be looming nearby. It hooks up to a smartphone via Bluetooth, and doubles up as a hands-free device with the push of a button. Not only that, it is one tough cookie, with durable design specifications such as weatherproof, anti-shock, dust-proof, and long battery life. You can opt to bend it into various positions, including free standing speakers, wrapped around straps on bags, as well as on wrists. Any takers for the M25?