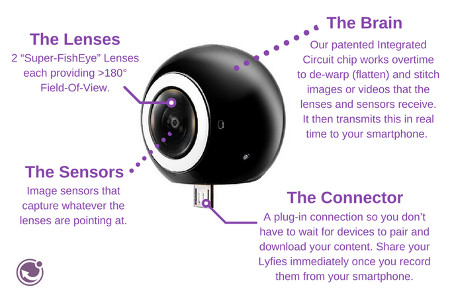 eCapture Technologies recently announced a Kickstarter campaign for its LyfieEye device, which is something that will cater for those who have a penchant for snapping photos with their smartphones wherever they go. Of course, there are different ways and methods to shoot something in a creative manner with but a smartphone, but it would not hurt to be able to have a unique camera accessory to go along with your shots. The LyfieEye is touted to be the first truly affordable camcorder that plugs straight into Android phone ports — it works across USB 2.0, USB 3.0 or USB Type-C types.

With the LyfieEye, you can preview, record and playback immersive spherical 360º videos and photos. These recorded media can subsequently be shared directly to Facebook and YouTube for 360º Spherical Views. Not only that, it will be able to synchronize flawlessly with any VR (Virtual Reality) headset that is currently available on the market, all without the need for any kind of technical lag. The direct microUSB plug-in will also make a solid connection without any kind of interference. In other words, the LyfieEye will be able to plug, record and share seamlessly.

In order to make the LyfieEye possible, there are proprietary technologies which empower it. Among them include an innovative, seamless LyfieSense architecture which optimizes several specialist technologies: among them include optical lenses, semiconductor image sensors, an image processing IC chip that was created specifically for synchronizing LyfieEye’s two lenses, the USB connector for USB 2.0 / 3.0 / Type-C, and software integration with smartphones.

Targeting long term use, the LyfieEye will come with a recommended retail price of $149 a pop, but the first hundred backers can pick up it up as a discount for $109.