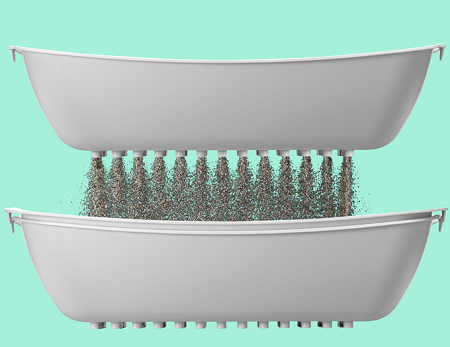 If you have cats, you know of the glorious little nuggets they leave behind for you in the litter box. They don’t really have any other bathroom unless you train them to use the toilet, and you have no choice but to be the cat’s ever-faithful servant. While you could get one of those sweet robotic scoops to avoid using a glorified slotted shovel, there is a new method coming to light that is cause to make all feline friends rejoice.

This is the Luuup Litter Box, and it is appropriately called “The Best Cat Litter Box Ever Made”. This is a system that uses three sifting trays all stacked on top of one another, and you only need lift to sift. The three trays are identical, but once you lift the topmost sift, you only need to empty it, turn it 180 degrees, and put it at the bottom. This will give you an endless loop of trays that you can use, and your only job after that is to top it off with more litter from time to time.

Just to make sure this is foolproof, they’ve included smart stacking tabs on the sides which will let you know if you’ve nested it incorrectly. Since stacking it wrong will be impossible, you never have to worry about picking up the stack and having all the litter fall out of the bottom. This was made specifically for clumping cat litter, so any pine pellet litter will be a no-go. This is going to cost you $29, and is part of an incredibly well-funded crowdfunding campaign.