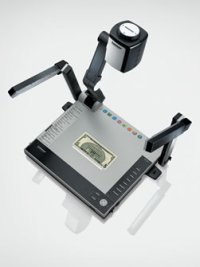 Folks who holds presentations in corporate boardrooms and lecture halls often might want to check out another tool that could help them be more effective in their work – the Lumens PS660 Desktop HD Visual Presenter. Don’t baulk at the price of $1,995 though, as HD desktop visual presenters rarely dip below the $2,000 mark, making this one heck of a deal considering the functions and features that it has on the plate. The Lumens PS660 has the distinction of being the first SXGA desktop visual presenter in its class that boasts one-touch integrated audio and video recording, HDMI interface and SDHC support. Not only that, the PS660 also comes with other high end features including full HD 1080p resolution, true SXGA resolution output, 15x optical zoom and a five-year unlimited warranty.

Several crucial specifications of the Lumens PS660 include :-

If you’re curious to see the performance of the Lumens PS660, then we suggest you’d best mosey down to the Florida Education Technology Conference (FETC) as Lumens is at booth 561 demonstrating their wares. The image you see here is not the PS660 but is that of an older model as it isn’t featured on the company site yet.