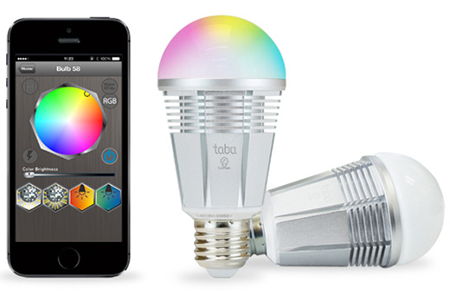 I am quite sure that when Thomas Alva Edison invented the lightbulb, he never really envision the day when a descendant of Alexander Graham Bell’s invention, the smartphone, would be able to perform an intricate tango with a descendant of his lightbulb down the road. I am referring not to any ordinary lightbulb, but rather, the Lumen TL800, which is the first Bluetooth smart bulb that is available in the market – at least in North America. Instead of settling for just one color or two, with the Lumen TL800, you will be able to have up to sixteen million color options thanks to the dimmable LED RGBW (Red, Blue, Green and White) bulb.

As it relies on Bluetooth 4.0 connectivity to “communicate” with your smartphone, the bulb will then be able to be used just about anywhere, as long as there is a socket lying around somewhere. The only things that are required would be the bulb itself (of course), alongside Lumen’s proprietary app, which will currently be made available for Apple devices and selected Android models. All you need to do is to download Lumen’s proprietary app, plug in the bulb and you’re good to go to introduce light – all sixteen million colors of it, to the room.

This is one energy efficient bulb which is capable of generating around 400 lumens of warm white light, and that is comparable to a 40W bulb. The thing is, it will only consume one-sixth of the power consumption of a regular bulb while doing its job, now how about that? As long as it remains within Bluetooth range of the smartphone, the bulb will turn on, and turn off when outside of the range for low power consumption, benefitting not only the bulb but the smartphone itself. Each of these bulbs are said to be able to last for up to 30,000 hours, and will cost you $69.99 a pop.